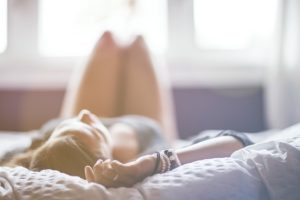 My mother’s baby sister was going home the next morning and wanted to have her one last night out. What that really meant was that she had hooked up with a local guy and wanted to get a last-minute make-out session before she left. And, dutiful little girl that I was, I covered for her by going along with the story we told our parents and acting as look-out so she wouldn’t get caught.

The funny part is she’s now married to that same guy, so I guess things worked out well for her.

So there I was, sitting on the sidewalk at the corner of a street on the other side of town. Alone and at night. The happy couple was further down the block, leaning against a fence and well hidden. I was bored and wondering what the hell I was doing when a truck drove by. I looked up and saw that among the 3 guys in the truck sat Gabriel. I smiled but didn’t wave. And I forgot about it.

Two minutes later the truck drives by again, slows down and Gabriel gets out.

He hadn’t seen the amorous couple, couldn’t understand what I was doing alone in a neighborhood so far from home, and he wanted to make sure that I wasn’t getting into trouble. At least that’s what he told me. After I explained what was going on, he told his friend to come back for him later and sat with me.

That’s how I ended up with Gabriel in a dark street in the middle of the night.

He never did tell me what the fight was about. I’d like to believe that it was something stupid, innocent, simple. Who knows? Whatever it was, he never told me.

And we talked. Like the days when I was behind the cash register and he was behind the counter. As if it hadn’t been months since we’d last spoken. As if we were really good friends.

He was asking questions that made no sense, about things I didn’t want to discuss with him. And still, I didn’t understand where he was going with the conversation. I didn’t see that he was making sure that there wasn’t anyone else in my life. I still saw Gabriel, comrade in arms against my father and his partner. It never occurred to me that he was interested in me as anything else than a friend.

What can I say? I was a very naÃ¯ve child, very smart and very dumb at the same time.

I don’t really remember when he first kissed me. I do remember being shocked and then curious, and, eventually, even a little turned on. Though Gabriel didn’t have a shy bone in his body, we only kissed a few times. Even if we’d wanted to do anything more, his friends were coming back shortly and my aunt and her guy were just a few steps away. So we kissed a few times, perhaps a bit bolder than I had expected, and we never talked about it. But we did repeat it.

I wrote {memory dream 1} after dreaming about Gabriel for the first time since he died the year before (in 1998). I never finished the story and the posting has been up, incomplete. I dreamt about Gabriel again and thought that I should finish the story. So here you have {memory dream 2}.

Gabriel was never my boyfriend. He was never mine in any way. What he was was the guy that made me laugh, with whom I occasionally snuck away and made out with, and who sometimes got jealous over the other guys in my life. He was the guy that asked me to dance every chance he got, and flirted with all the girls and made them all sigh. He was the guy that married someone else, had a baby with her, got arrested for something he did do, and died in jail. He was a friend a long time ago, a nice memory, a sad reality.

I love my new car. I love the idea of owning a new car. It’s a great feeling. Except, of course, that between the down payment and the down payment for the insurance I destroyed my bank account. Add to that the fact that I was forced to take several weekends off my other job, I’ve ended up with no money at all. I keep thinking to myself that I only have to make it to next weekend and I will be fine. I _have_ to believe that or I’d be worried.

The reality is that I’d become so used to having lots of disposable income that I’d been spending too much money on junk. Lots of lunches out. Lots of stupid stuff that I’ve been paying for without realizing it. Now I’ll have to be more careful with my money. And maybe I won’t be so broke again.

On the subject of money, I’ve been busy working on the website for my first paying website design customer. I had been approached by people before to do small website projects for a fee. And I always turned them down. I was too busy. I didn’t want to commit the time and energy. I didn’t want to start doing websites for money. They were stupid reasons, but they were my reasons and I stuck to them. I finally decided that I do this for free for too many people and I need to get some money out of it, not just a portfolio. So I guess my very first client approached me at the right time.

Of course, I’m charging practically nothing. She’s a friend and this is my first paying customer and I don’t want to get greedy. But I know that I can count on her for plenty of references, and that’s mostly what I hope to get out of it. References for other clients who I will charge adequately because they won’t be friends and I actually do need the money now. Amazingly enough, I have a potential second paying client even as I write this. Nice. I figure that this hobby will start actually making real money sometime this year. Wellâ€¦. I can always hope.

I met a guy I might actually be interested in. He’s in my marketing class. He’s nice, single and cute. We’ve been doing the subtle flirting thing. Of course, it’s been so long since I’ve even done that that I’m very conscious of everything I say and do. Silly and stupid, but true.

Nothing’s probably going to come of the flirting game, but I need to start somewhere. Wish me luck!