8:00 a.m.
I lost two pounds last week. This is good news considering that I was “relaxed” over the weekend. I didn’t binge, but I also didn’t have as many vegetables as I should have.

I did manage to make it to the grocery store yesterday. I need to find another place to shop. The fresh vegetable selection at my nearest grocery place is minimal. I miss the store I used to have when I lived in Montrose.

1:00 p.m.
Lunch today was leftovers from dinner last night, which was based on leftovers from lunch out yesterday: pineapple shrimp fried rice. I added broccoli slaw to the rice, onions and peppers, as well as ginger and white wine vinegar, and made the dish into something I could bring with me for lunch. Not the most nutritious lunch, but better than it could have been.

8:00 p.m.
Dinner was Thai chicken noodle salad. I sautéed the chicken and noodles in a wine vinegar/Sriracha combo that results in spicy Thai noodle salad. It was really good. I will need to make it again.

I went to a happy hour event and had too many drinks and indulged in bar food. I had lots of fun. The diet did not go with me to this event.

9:00 a.m.
I made the mistake of weighing myself this morning. The scale is showing the effects of last night. Why is it that one single meal, one celebration, can undo an entire week of being good?

Today lunch was after 3 p.m. I’ve got to stop doing that. We’d been there for more than an hour, nearly two, when she casually turned to me and said, “Did I tell you that my husband and I broke up?”

I turned to her, startled. My eyes big, my face frozen, I silently shook my head in response.

Her words were nearly drowned out by the noise in the room. We had been sitting in a sports bar with an important soccer game blaring from what seemed like 200 big screen televisions. The crowd was rowdy, especially two hours in. We’d all had a few cocktails by that point. And the game had been especially frustrating.

Her timing was beautiful. In that crowded, noisy room I couldn’t give her the third degree that would normally follow that pronouncement. I couldn’t ask her when it happened, what pushed her to make the decision, how he took it. I couldn’t ask her how she was handling it, where she was living (did he move out or did she), or how her family was reacting to the news. I couldn’t force her to answer tough questions.

I think that was the point.

She told me, in brief sentences, the bare basic details. And that will have to do, for now. I expect that, down the road, we will actually talk about this. But it’s not going to be anytime soon.

I’ve known her for nearly 20 years. One of the few friends I’ve kept from college, some years we are closer than others. I attended her father’s funeral and held her up during the funeral of her best friend. But I wasn’t at her wedding. I wonder now, five years later, if it was just that that was one of those years we weren’t that close, or if it was just the beginning of a long pattern that ended in tonight’s pronouncement.

Thinking about it, about the timing and the fact that she didn’t tell me until she literally had to (because someone else might have) I start to put things together. She’s been impossible to get this year. I’ve tried in vain many times to schedule a lunch or brunch. She’s busy busy busy, and never proposed alternate dates. But that’s happened before. Sometimes we go months and months between offline conversations, so I hadn’t given it too much thought. Now I know, though, that she was acquiring a new situation.

She’s told me, many times, that she and her husband have been together a decade. They’ve been married for half that time. In all those years I can count in single digits the times I’ve met him. I used to tease her that he was imaginary. The imaginary husband that’s only real in photos and hazy recollections. And we would both laugh.

The truth is that, for me, the pattern of what a marriage is comes from those within my immediate family. My mother, my sisters all have very traditional, old-fashioned marriages. They are a couple and rarely do things apart. If one attends an event, it’s more likely that they’ll both be there.

That’s not the case with my friends. Most of my friends have separate lives, separate friends from their spouses. They spend time apart and it’s not considered odd.

And so, I had a non-conversation about a pending divorce with a bar scene in the background. I learned a while ago that my most creative hours are after the time when most people go to sleep. It’s not unusual for me to be up at midnight, or 1 a.m. Often it’s because I’m working on something specific. Or beause I’m watching something on television.

My night owl tendencies never bothered me. I lack of sleep never impacted the next day. But that’s no longer the case.

After last year’s surgery, my sleeping patterns changed. Now I don’t go to sleep early because I can’t. And the next day I am zombie-like.

So I sit here, with a video running on my ipad, surfing my networks, keeping busy and watching the clock.

It keeps getting later and later. And I know that in a few hours I will have to “be up.” 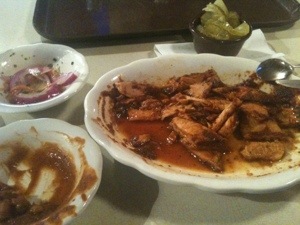 Making good food choices is a daily challenge. If I have a stressful day, I want food. If I’m feeling depressed, I want food. In fact, food is one of the first things I turn to regardless of the reason.

I especially crave breads and potatoes. But I don’t react well to them

There’s a barbecue place within a block or so from my office. It’s an easy walk. And they are open past 2pm, which is a big deal downtown. Because I often wait until after the regular lunch hour to actually eat lunch, I end up here a lot.

Pictured here is today’s lunch. By no stretch of the imagination is this the healthiest or lowest-calorie lunch I could have had here. They have hearty salads with low-fat dressing. I’ve blogged about them in the past (or included them in my weekly updates). But today I wanted something different.

What I wish this picture showed was a turkey poboy with fries. (They have the best fries here.) What you will see here is that I opted for the turkey plate with baked beans and the cucumber salad (or you would have seen the beans and cucumbers if I’d taken the photo before eating). You also will see here that I added barbecue sauce and lots of pickles. What you won’t see is bread.

I am eating bread; that is, I haven’t given it up completely. But I have opted to only eat bread sparingly. Not everyday. Not multiple times a day. And not as an “added on” to a regular meal.

I have bread in sandwiches. I have tortillas in tacos. And that’s pretty much it.

I miss it. I really really miss it. I wanted a few slices of bread to soak up the barbecue sauce. I wanted the option of making an on-the-spot sandwich with the turkey slices, with extra pickles

I just wanted bread with my meal. I still want it.

I think that dinner today is going to be a peanut butter and jelly sandwich, with a side of apple slices. Maybe I can hold out my bread craving until then.

I had a good week.

Monday, March 18, 2013
I am being friends with Weight Watchers this week. Trying to keep away from things that are bad for me (lots of breads, fried foods, sugar) and loading up on veggies and simple foods.

Today I opted for honey mustard dressing instead of the full-fat blue cheese I’d much prefer. Sometimes I have to celebrate the little choices.

Tuesday, March 19, 2013
Is two days in a row of being good too early to celebrate? I´m going to count this is a win even though today I did choose the blue cheese dressing.

Wednesday, March 20, 2013
I started cooking again. Even though my refrigerator and cupboards look bare, I had the ingredients for a healthy dinner: grilled chicken and black beans with onions and peppers. As a treat I added in some feta cheese. It was delicious.

I also went ahead and made a small “meat loaf” for tomorrow night. Basically, I mixed ground meat with a packet of mushroom/onion soup then cooked it as a large patty. The soup packet has more sodium than I’d prefer, but the loaf will be ready for dinner tomorrow. That counts as planning, right?

Thursday, March 21, 2013
The meatloaf was good. I paired it with creamed spinach: chopped spinach sautéed with olive oil, minced garlic, garam masala, laughing cow cheese and a dash of fat-free goat cheese. Delicious, and I kept under my points for the day.

Today I decided that God is just going to have to forgive me: I had coffee.

Friday, March 22, 2013
I’ve managed to keep tracking my food all week. That’s a first in a long while. I think that as long as I keep doing that, truthfully, I may manage to keep on track. The goal is one pound per week. That’s it, just one pound lost per week. I can do that. I’m almost completely certain of it.