It turns out that I have an entire series of stories about my friends getting into, well, physical fights. The bar fight story, the time my friend greeted the police while literally sitting on someone to subdue her, the “I almost threw down with the sorority girls” story, the I got jumped while taking pictures story, etc., etc. A few of these are about fights that didn’t happen and a few are about fights that did. I am going to point out that none of them are about me. I will share these one at a time over the next few months. To protect the innocent, and the guilty, I am not including names. (Yes, mostly because I didn’t ask permission before sharing the stories.) And I start with the story of a verbal fight in the main Central Market store… 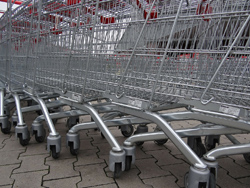 Reading this very entertaining account of a writer’s visit to Whole Foods reminded me of a story from a friend about a very public shouting match. This happened at Central Market near River Oaks:

In a shopping trip to Central Market, my friend was dropping in to pick up some last-minute items with her baby en tow. Have you ever tried to shop for anything with a baby? It’s a thing that requires practice and talent. I know from watching others try it; I’ve never actually done it myself.

She’s finished shopping and has her bags in a cart and is headed out. She’s manged to get what she needs and is ready to head out in the time allotted. Then she gets attacked verbally by the ecology police. (She used the word “ambush.”)

“She comes up to me and says, I can’t believe you’re using plastic bags. And with a baby! What kind of place are you creating for your child? Don’t you know better?”

My friend has never seen this woman before. Was just unlucky enough to be standing next to her in a grocery store. She admits that she did, in fact, have her groceries in plastic bags. And, truthfully, she’s usually conscientious about making sure she using paper bags (or reusable ones), but that day she was busy and not paying attention. Not that any of that made it to the conversation.

But my friend counters to the unknown woman in a very fast retort, “Don’t you know better than to go up to strangers and bother them with your opinion? This is Texas, you’re likely to get shot here.” I’m not sure what reaction the unknown woman was expecting, but this was probably not what she was hoping for. The conversation went downhill fast from there. It became a very public, very loud shouting match, in Central Market.

The incident ended when staff got involved. And the other woman was still yelling at her that she was destroying the world and condemning her child to a horrendous future. And this all happened as here son looked upon them, serenely.

I never knew the upscale grocery store experience could be so vicious.