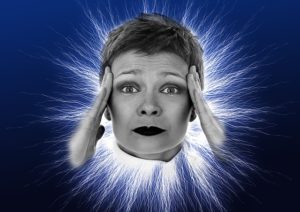 The day before my orthopedist appointment, I had sent my brother to my office, to turn in my doctor’s note for the extended leave of absence, to pick up paperwork so I could file for FMLA, and to pick up a laptop they were letting me use to get caught up on email while on mandatory bedrest. (Laptops work in bed.)

Once the pain was, mostly, under control, I was very very bored. Unfortunately, I was also on a Valium/Vicodin combination that made it very difficult to care about what was going on at work. Sure, I checked my email and responded, but I just couldn’t get worked up over the fact that I was going to be out for at least two weeks (maybe more).

So imagine me dozing off on a whim, just closing the laptop and sliding it to the other side of the bed, and sleeping at will. I lost track of morning and night, sometimes staying up until 4 a.m. and then sleeping until 3 p.m. That’s just the way things were.

The whole MRI experience was weird. I’m not claustrophobic, but I felt a bit disoriented when I was allowed out of the machine, after 45 minutes. It wasn’t bad, just weird.

After that I had at least one more week of mandatory bedrest (assuming I was managing the pain and my doctor allowed me to go back to work when he had initially estimated) and three more weeks before my next appointment with the orthopedist.

I have to say that the medication worked wonderfully. I was still in some pain and quite a bit of discomfort, but it was nothing compared to the previous week. A piece of cake, in fact. True, the painkillers were also killing my appetite, but I’ve never gotten that much rest before.

After a few days, as instructed by both doctors, I started to get up from bed to test my limits and build up some stamina (I guess). The idea was to see if I could walk around, sit, etc. without pain. The other goal was to see how long I could walk, move, etc., without having to resort to extra medication. I can honestly say that a 10-minute visit to the dining room wiped me out the first day, but I wasn’t in pain, just extremely tired. That got better.

The Thursday before I was supposed to go back to work, I dropped off all my FMLA papers, and the release to go back to work, with the people at my clinic and was told to come back the next day after two in the afternoon to pick them up. At that point I’d been out of the office for two weeks, on bedrest for most of it. Without these papers, I wouldn’t be allowed back by HR and the sick leave would count against me in my yearly evaluation.

I did my part and waited until the next day, calling the doctor’s office at 1:30 p.m. to make sure that the papers would be ready. And was told by a frantic nurse that I needed to come by the office right now, that the doctor wanted to see me immediately.

It seems, the report from my MRI was in. He didn’t have any good news for me.