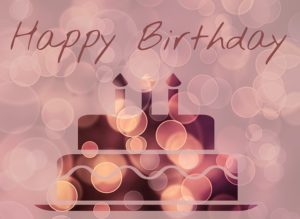 {{“You’re so ridiculous, but in a nice way,” Arianna says to me after I’d sang “Happy birthday to me!” for the dozenth time of the day. She says it with a smile, I suppose that’s so I don’t take it to heart.

Even her comment doesn’t dim my enthusiasm for my day. I’ve been humming, skipping, literally hopping throughout the day. I’ve been in a goofy mood today, the likes of which I haven’t had in a long time.

Today I have allowed myself to be myself and have let go of all the baggage I usually have with me. I’m happy. It’s nice.}}

This is it! Today is my birthday. And it’s not just any birthday, it’s my 30th birthday. Am I a grownup now? Am I just getting old? Who knows the answers to these questions? Not me.

I’ve been looking forward to my birthday for months, like a child waiting for Christmas. Counting off the days, anticipating the presents and the fuss.

Cake at home. Cupcakes at work. Lunch with my family. Dinner with friends. Lunch with coworkers. Birthday cards. Big gifts. Small presents. Well wishes by phone, email and in person. I even got a birthday note from the big man himself.

OK. OK. I’m milking this for all it’s worth.

{{“I want Thai food,” I had told my family when asked where I wanted to go for my birthday. Mother wanted to barbecue, which I didn’t want to test, since we’ve never ended a barbecue in a good mood. Arianna wanted to do something very fancy, which I wanted to veto since I knew that they had spent quite a deal of money on my presents and the cake already. Thai food sounded like an affordable, safe choice, since we all like the restaurant I selected but hadn’t been there in a long while.

“Let’s go to Kim Son,” I opted when we found out that Nit Noi was closed. Choosing Vietnamese food ended up being a really good idea, especially since we’re all more familiar with it than Thai. Other than the kids deciding to test their lung capacity, the meal went off really well.}}

I checked my father out of the nursing home in the morning, about 10 a.m. He wasn’t really feeling well, but I couldn’t see a way to not take him home for a visit on my birthday. Of course, I spent loads of money on brunch, since he wanted barbacoa and tamales. Do you know how much it costs to feed barbacoa and tamales to a family like mine? Well, more than the average lunch. Anyway, it made him happy, which was a good thing. He was tired long before the restaurant outing, but we cut the cake while we was there.

{{“Sing Happy Birthday to your tÃ­a,” Linda coaxes my nephew with a smile. Not that he needs much coaxing, since birthdays are among his favorite things. Where else do you get cake, presents and plenty of noise? He claps and sings and squeals with delight. If it were up to him, we’d have birthdays all of the time.}}

As for presents, I got some really good ones this year. My family gave me one big present, a pearl necklace and a matching ring in white gold. I’ve always wanted a pearl necklace but never got around to buying myself one. Mother says that she and Arianna had several arguments over the necklace. Arianna, of course, thinks that she actually knows me and wanted to buy me a single solid strand of white pearls. Uh uh. My mother argued for gray-toned pearls, spaced about an inch from each other, set on a short strand, which is exactly what I would have chosen for myself. Arianna was slightly peeved that, not only did they not buy the ones she wanted, but I liked these better. Anyway, I love them, which is the important thing.

Linda gave me money. Actually, she gave me enough money that I could afford to go out and buy myself a PDA – which I’ve wanted forever. I can’t wait to go out and spend this. I think I actually know which one I want, since I’ve been window-shopping for so long. In addition, she bought the birthday cake and paid for the restaurant. Considering that she’s arguing with her husband at the moment, that’s really nice of her.

Of course, I got lots of smaller presents from other people. Some nice frames from my assistant. Taken out to lunch various times. Flowers. A few decorations for my house and my office. Nice touches, good thoughts.