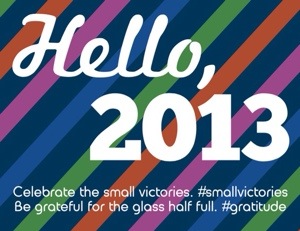 A lot of things happened in 2012. The biggest was the hysterectomy. The most inconvenient was moving to the suburbs to live in and watch over my brother’s house. The most surprising was the new circle of friends I’ve added thanks to new activities I’ve taken up, and how they’ve impacted my outlook. All in all, it was a busy year.

One of the things that became clear was that I was becoming focused on the negatives. Somehow, over the past few years, I let myself fall into a habit of zooming in on all the ways I can fail, have failed, have not created my most perfect, ideal life. It’s a habit that, unbeknownst to me, was actually perpetuating the bad and making things seem worse than they were.

I had to stop.

My transition from “Gloomy Gus” to “Joyful Daisy” (I just made that up ::grin::) actually began in 2010, when my truck was broken into. I tried focusing on the “lucky” parts of the process to help myself cope:

I could have spent the day, and the following weeks and months, ranting and raving about the inconvenience and the expense and the awful feeling that the closed, locked parking garage was broken into… or I could deal with it and move on.

Over the next year or so I tried applying that approach to several things, including my challenges at work, and I found that I was not as successful with it, but it did help. Mostly, I wasn’t trying very hard to shift my thinking from what I usually did to what I wanted to do: focus on the good.

My health problems began mid-2011, but became severe early 2012. In the midst of dealing with the doctors and my job and the money and the rest, I had to decide how to move forward. Was I going to dwell in the “oh, poor me” mood, or was I going to accept it and move on?

Making a decision to focus on the “half full” parts of my life made 2012 bearable, and I have to admit that I am in a much better place emotionally and professionally than a year ago thanks to that approach. So don’t be too shocked is you start seeing short posts about things for which I’m thankful. I will be using the gratitude tag on these posts.

This year I am not making real new year’s resolutions. I stopped doing that a few years ago, focusing instead on themes for the year. Some years are more successful than others. Mostly, I want to focus on achieving better balance this year. The challenges with my health have taught me that I’m not indestructible and that I need to start spending time on myself doing the things I actually enjoy. Instead of trying to make all my activities be about creating something or that they have some practical application, it should be enough that I’m finding joy in the event or activity.

In addition, in 2013 I am going to set short milestones and goals for myself. This will help break down my big themes into small achievable marks I can celebrate throughout the year. It might be something as small as having breakfast every day to something a bit bigger like opening a Roth IRA account. And I don’t promise that the goals will be practical things.

Get ready to see small posts about these items, from the “so what?” stuff to the “wonderful!” using the small victories tag.

I always start the year with enthusiasm. There’s something about starting from day 1 with a new year that makes me hopeful for improvements. Let’s all hope for the best… and be grateful.

Recommended reading: “From Grief to Gratitude: How a Gratitude Diary Helped Me Rebuild My Life.” I like the idea of a gratitude diary. I may have to try it out.

2 thoughts on “Happy New Year, 2013 will be all about #gratitude and #smallvictories”