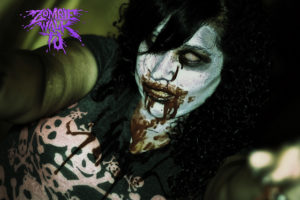 This weekend is the annual Houston Zombie Walk. As a “fan” of zombies in the media (books, movies, shows), I can understand that allure of dressing up as one or even attending an event to watch others dressed up as zombies. But, and I have to be honest here, there’s a part of me that remembers that this is the way many many horror flicks start: a “fake” event that turns real. Just in case the zombies “come to life,” I want to be far far away.

Before you laugh at me too much, let me remind you that there have been a few reports in the news about people “on drugs” literally eating other people. And I mean biting off chunks and ingesting them. {{shudder}} It’s been more than a few and they’ve been in different parts of the country.

I like to think that I’m a rational person. So, I convinced myself that it was just an unfortunate side effect to bad drugs (though how high you have to be before cannibalism seems like a good idea escapes me). Because, really, zombies areÂ not real.

The I came across a news story talking about a new drug that eats your flesh from the inside out. Basically, it kills your flesh, organs, veins, etc. one at a time until you die. It’s being called “the zombie drug.”

Okay. Is it possible that the zombie apocalypse has already started and is being covered up?

A friend of mine scoffed at me when I posed this question to her. (And it’s amazing that it wasn’t the question itself that made her laugh, but the logic behind it.) “If this was the zombie apocalypse, then the end of the world would have arrived already. It’s supposed to be fast,” she tells me.

And my response? So, maybe, just maybe, it’s aÂ slow zombie apocalypse. I don’t think we should discount the possibility just because entertainment got the speed wrong.

So, all in all, I think I’ll stay away from the Zombie Walk for the time being. You can take your chances; I’ll follow your updates on Twitter.