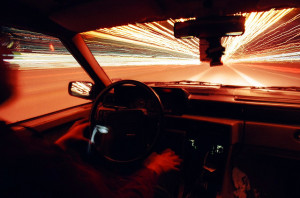 One of my friends nearly choked on the wine she had just sipped. They all looked at me with equal expressions of fascination and horror. There were some people in neighboring tables with similar expressions (I never learned to use an “inside” voice).

“What?” sputters one of them.Â I smile and tell them the story.

I was driving down 288 going home, doing my usual 70 miles an hour down a mostly empty freeway. It was still light out but it was past the rush hour. I was driving a Ford Explorer, so I was sitting pretty high up from the ground. To my left pulled up a sports car, a convertible with the top down. I looked over to make sure I wasn’t drifting too close and saw… well, he was pumping away with his left hand.

I turned back to looking straight ahead fast, not wanting to accidentally kill myself or anyone else. What did I just see? No. No. I’m wrong. I didn’t just see that.

The sports car was keeping pace with me, staying on my left while we took curves and dips. And I could see, from the corner of my eye, he was still… “busy.”

So I slowed down, thinking I’d let this guy speed ahead and lose him.
And he slowed down.

I sped up, trying to lose him.
And he sped up.

Okay, this is just ridiculous. I’m being flashed by a pervert, going 70 miles an hour down a Texas highway.
And I could tell, even though I didn’t want to be aware of it, that his “activity” continued.

I finally maneuvered several other cars between us and lost him that way. And I don’t know what happened to him after that. I do know that my story of what happened entertained an entire restaurant, it was just that gross and unexpected.

This is the kind of thing that only happens to me.
My friends agree.

One thought on “I didn’t know you could do that while driving!”