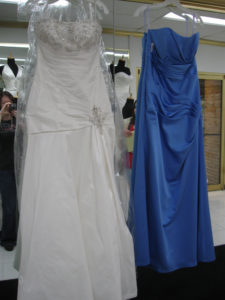 The accomplishment of the week was when I found the dress I am wearing to my brother’s wedding. If you’ve ever had to find a dress for a formal occasion, as a “voluptuous” woman, then you’ll know that’s indeed an accomplishment. Shopping is hard work.

If I’d been willing to spend a lot of time shopping, going from store to store, trying on dresses, and comparing, then I might have been able to find something less expensive. I wasn’t going to do that and my pocketbook shows it.

(NOTE: the dresses shown here are just a stock image, not the actual dress.)

I started out the the bridal shop where my sister-in-law-to-be bought her wedding dress. I found two dresses I liked and that I would have been willing to buy. I was told it would take six weeks for them to get either dress for me. Six weeks! That would mean I wouldn’t get the dress until the week before the wedding. And at least one of the dresses needed alterations. Obviously, I didn’t buy either.

Three shops later, I found two wonderful dresses at Nordstrom’s in the Galleria. I should have started there. I have had wonderful luck shopping for special-occasion dresses at that store. I bought both, and neither was on sale. I should point out that neither needed any alterations either.

One of the dresses is a fitted purple knee-length cocktail dress. It fits well, but I’m absolutely going to need some “support” when I wear it. The other is a floor-length champagne sleeveless dress with a full skirt and the embroidery on the bodice; it’s accompanied by a sheer embroidered jacket.

Now I just have to find shoes and accessories… and decide which dress I’m actually wearing to the event. I have weeks to do that.