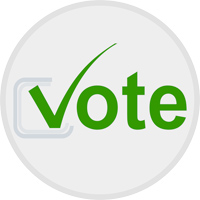 Last year when my sister was getting ready to go vote, my (then) five-year-old nephew told her he was ready to go vote too. He was very earnest in his desire to cast his vote. She explained to him, gently, that he wasn’t old enough. She told him that he needed to be 18 before he could vote.

This baffled him, “But I know who I want to vote for!” he told her, several times. He couldn’t understand why he couldn’t cast a vote if he knew who he was going to vote for. Why did he have to be 18 before he could elect the president?

She had to leave him at home, disgruntled and upset because he couldn’t elect the president.

“He would have cancelled out your vote, you know,” I told my sister later. And we both laughed. She ruefully acknowledge the truth of that.Â It seems that, while my sister (erroneously) believed that her son was too young to have political discussions, his friends did not share that belief. Several of the families of his friends have strong political beliefs, which the children mimic, and which they shared with my nephew. And which he picked up as “truth.” They just happened to be in opposition of those shared by my family.

“Isn’t he a little young to be rebelling against your politics?” I asked her when she told me who he wanted to win the presidential race. And she just laughed again, agreeing that, perhaps, she needs to start talking about these topics with him.

The fact that the person he would have voted for was the one we voted against was something we didn’t tell him at all. We figured he was upset enough already.

Even the five-year-old knows it’s important to vote. Did you do vote?