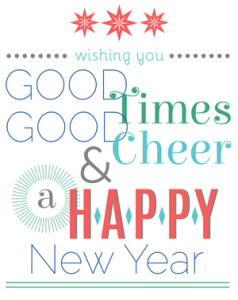 This is not going to be one of those deep and insightful posts you’ll see everyone else sharing, looking into the successes and failures of the previous year. Even if I wanted to write one, that’s just not what I do in this space. I will, however, share my list of what went well and what didn’t.

I gained 10 pounds. Repeatedly. I lost some weight, in one and two pound increments. But ultimately, at the end of the tally, I gained 10 completely new pounds.

I saved money. Not as much as I wanted, but I did manage to save money. I ended the year with more money in my savings account, and that’s what counts.

I spent too much money. Frivolous dollars on things I barely remember. Things I regret and things that I don’t regret.

I made better friends. I started to see a patten on those around me — successful, supportive people who encouraged me to do better instead of telling me all the ways in which I’m failing. I tell myself that I’m failing on a nearly daily basis, I don’t need others to do it too.

I stayed on the yellow brick road when all the fun was happening in the fields around it. But I had to jump. I’m out of practice at jumping. I didn’t.

I realized that I don’t use my indoor voice enough.

I realized that people I thought were my friends don’t share the same definition of friendship.

I went to mass for the first time in years. Then I realized that I didn’t miss it. Is my relationship with God too broken now?

I realized that I’m not sure I want to own a house. And that freaked me out. Isn’t that what I’m supposed to want?

I stopped being ashamed of saying that I’m roommates with my brother and his wife. I spent most of the year feeling like those words made me a failure somehow. Now I just don’t care.

I realized that depression and exhaustion can be different words for the same feeling.

I embraced my egocentric tendencies. I say that I’m not aware that others think I’m brilliant (though they use words like ‘talented” and “smart”). But the truth is that I know, and I get a thrill from it. I often tell friends and colleagues that there’s no drug quite like strangers coming up to you and telling you that you’re fabulous… and there isn’t. It sounds immodest to say, but truth is truth.

I like being in charge, but I don’t think I want to rule the world. And it’s that sentiment that’s kept me where I am for far longer than most people think I should have stayed. And I’m still here.

I’m hopeful for next year. And I know that things are going to improve…

{{I guess I did end up being deep and insightful after all.}}