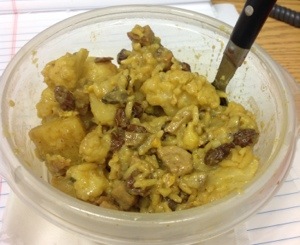 Lunch today was homemade yellow curry with cauliflower. The recipe called for potatoes, and I did include a few, but the cauliflower is my attempt to include some veggies in it.

First sautÃ© the cauliflower until soft. Make it as crunchy or as soft as you want.
Add peppers and onions.
Add spices and coconut milk. Let simmer a few minutes.

After the spices and the milk have combined and soaked into the cauliflower, add in the rest.

You can opt to make this with some sort of meat, which is added at the end (pre-cooked).

Tastes best if you’ve let it sit overnight to reheat the next day.

I’m very happy with this recipe. I will definitely make it again.