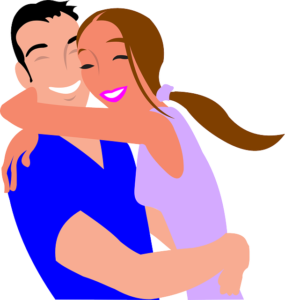 They met in a bar.

I should clarify that what that means is that the first time she saw him it was in a bar. He was on a date with “some random skank” (as she describes it, years later) and she was working as a waitress. He was in the last six months of a two-year contract with a local oil company. She was moonlighting to make her rent.

I should be able to tell you that the rest is history, that it was love at first sight and they lived happily ever after, but the reality is that there have been many many chapters in their story.

He says now that he doesn’t even remember who that girl was. I’m not certain that he noticed my friend that first time at all, but I know she noticed him. He made a big enough impression that when he came in the next time, alone, she gave him her phone number.

“He was just my type,” she says over skinny ritas after work. “And you should have seen me back then, I was toned.” I’m pretty sure she took him home that night, or went home with him, but that’s just a supposition. I’ve never asked, and she’s never volunteered that piece of info.

They really do have a great marriage, and I’m not just saying that because she’s okay with him going to see half-naked women dance around.

“I have dibs on him, you know,” I remind her. “If you ever die, I get your husband,” I tease. I’ve been telling her this joke since the morning I picked her up to go to work to find him ironing her clothes and planning the menu for dinner. This is what he did during the weeks he was back on shore, busied himself as house husband.

The only reason she lets me get away with the teasing is that she knows that I have no interest in her husband at all. And that I’m not the only one of her friends trying to call dibs on him.

They met in a bar. They fell in love. They lived happily ever after.

It’s a nice story to see in real life.